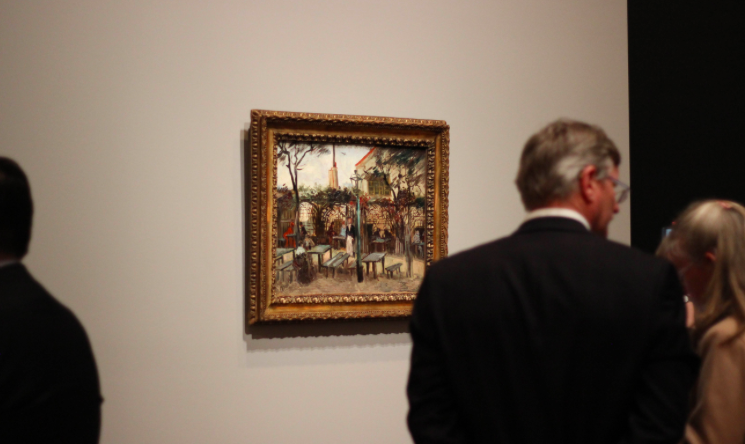 A variety of European business partners decked out the great hall of the National Gallery of Victoria on Monday night, to celebrate each other and the latest Melbourne Winter Masterpieces exhibition, and one rookie came along to see what it was all about.

The National Gallery of Victoria is no stranger to international guests, but the sheer variety of European voices that filled its great hall on Monday night is not often seen. European chambers joined together to present ‘Europeans at the Gallery’, an event celebrating European business in Australia as well as the ‘Van Gogh and the Seasons’ Melbourne Winter Masters exhibition that is currently exhibiting at the NGV. It was a display of unity that, in today’s political environment, is rare and incredibly welcome.

“Which is why we’re glad that the UK is also here,” it was quipped.

Personally, I had little experience with the world of European business, and was mainly drawn by the promise of being treated to a private viewing of ‘van Gogh and the Seasons,’ but even a positive newcomer, like yours truly, was able to glean that there was a positive vibe at the event. The presence of freely flowing food and drink was no direct obstacle to this, of course, but mainly it was a sense of genuine excitement about the myriad of exciting and differing voices being brought together that was to thank.

Guest speakers on the night were Dr Ted Gott, senior International Art curator at the NGV, and Willem Cosijn from the Netherlands Consul-General.

“Van Gogh, if pronounced correctly, should sound as if you’re very sick,” joked Cosijn, and as a fellow countrywoman, I can testify that he is not wrong.

Representatives from varied European chambers of commerce were also present, ranging from Switzerland to The Netherlands and many more.

Thanks to a big turnout, there was no shortage of interesting people to talk to - to the point of being almost stressful. It was fantastic to see such a melting pot of different backgrounds, as it is exactly this mix of differing influences, and not to mention the arts, that makes Melbourne such an exciting city.

The event was rather brief, though, at precisely three hours, and we were politely asked to leave at 9 o’clock on the dot by staff. And, unfortunately, on a Monday night there’s little hope of an after-party - but that’s probably just my youth talking.

The real star of the night, however, was the private viewing of the exhibition, which was curated according to the seasons, which were a source of fascination and inspiration to van Gogh. It is the largest collection of van Gogh’s to have ever travelled to Australia, and provides insight into his inspirations, including a room dedicated to Japanese art that inspired him, which is a connection not often made when discussing his work.

This focus on the season recalls the latest major exhibition at the NGV dedicated to David Hockney, which also had a strong connection to the seasons. In this way, ‘van Gogh and the Seasons’ feels almost like a spiritual successor of the exhibition space.

There’s little that can be said about van Gogh that hasn’t been said before, but it can be said that it would be hard to find a less perfect match than the marriage made between van Gogh and Europeans at the Gallery: the broad, bold strokes of van Gogh mirror the strength of trade and business between Europe and Australia.

A great article written about the Europeans at the Gallery event, which was held at the National Gallery of Victoria on the 29th of May.

Norwegian Chamber Launch Event in Perth was a great success

Introducing the new Young Professionals board